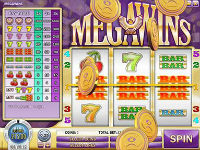 A popular game studio, Rival Gaming, has announced the launch of its new gaming product – a videoslot Megawins.

Megawins videoslot is a classic slot machine with three reels, five paying lines with traditional icons, simple graphics and rules. On the reels players will see pictures of cherries, sevens and various bar icons. In addition to the classic functions, the videoslot offers a special character Megahawk, represented in a form of a golden bird. When this symbol emerges on reels in a winning set, players get huge winnings. Moreover, the videoslot has special characters of cherries that generate gains when two or three of such symbols appear in a row on the reels. Thanks to these features, the new online videoslot can bring really great victories.

The new videoslot also offers features of Rival’s V4 Lobby, which has a simple and understandable user interface. During the rotation of the reels, players can see the paying table on the main screen, so there is no need to stop the game to see the potential winnings. Moreover, the new interface allows players to use chat support during the game.