Playtech Released a Trailer for the Forthcoming Slot The Flintstones 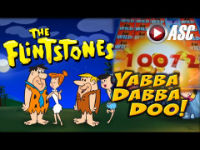 In the near future the company Playtech will release the slot game The Flintstones, which official trailer is now available on YouTube.

The Flintstones are incredibly popular animated series, which started showing in 1960. The show was a great success, and even today it is favorite animated series of many people.

The company Playtech has developed the online version of slot where players meet their favorite cartoon characters. The slot will have five reels and 1,024 ways to win. The game will start from 40p per spin and will be disposable on mobile and tablet devices, as well as on computers.

The slot will have five bonus features. During Bedrock Bowling players go to play bowling with Fred to win prizes. For every style of Fred’s play, players will get a cash prize, and knocking down of pins brings a multiplier.

In the main game, there is a function of The Flintstones Rocky Feature, which is played in random order. Fred and Barney trigger secret symbols that change in one randomly selected symbol; then a multiplier is applied to the resulting combination.